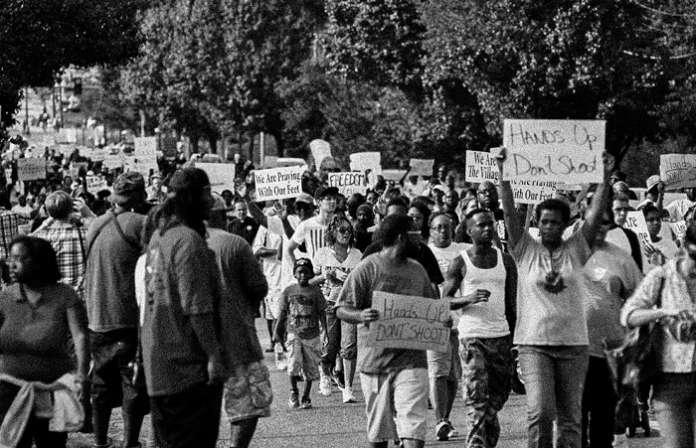 A friend sent me an article which quoted a police officer in Ferguson, MO snarling to a crowd, “Bring it. You fucking animals, bring it.” She asked for my thoughts. I’d seen the article earlier, part of the news reporting and blogosphere discussion of people of color killed by on-duty officers and the accompanying demonstrations against police violence. I think that coverage has correctly pointed to 1) entrenched racism, such that black faces are reflexively perceived as suspicious and dangerous, 2) and militarization of the police. But even with these explanations there seems to remain something incomprehensible, and I think that comes from just how differently the police tend to understand what they do.

In the past, when I’ve talked to officers about incidents, I’ve been struck by the lack of overlap in how the news or laypeople have described what happened, and the cops’ own take. Officers have an orientation and way of speaking about the uncertainty of encounters and the importance of coming home in one piece, documented in the earliest of sociological studies.[1] Steve Herbert referred to this in an article about his work with LAPD. He found “an unrelenting emphasis on officer safety” and a morality that constructs police work in relation to the “’ultimate sacrifice’ that officers stand poised to make–to surrender their lives to ensure the well-being of others” (2001: 307). Both characteristics will seem absurd or hypocritical to many readers in light of current events, but an officer I interviewed last month could have been quoting those studies, so alike was what he told me about the importance of officer safety for everything he and his colleagues did.

If you want to understand what could possibly be going through the heads of those cops standing there in full military gear and pointing at a bunch of civilians and journalists, in the sight of the world and to the detriment of their own public image, the key phrase for me in the Washington Post article my friend sent was “shots were fired at police.” According to other reports, on 10 August 2014, there was “one incident involving a Molotov cocktail and another involving a thrown brick that reportedly broke an officer’s ankle.” At such moments, I think a deeply ingrained way of perceiving what is going on is in full effect for those officers. They played a considerable role in creating exactly the situation in which they felt in danger, but why the situation unfolded that way is a different question; I am just saying that with that particular “under threat” perception, it’s not surprising, although unprofessional and deplorable, that you get officers menacing the protestors they are supposed to protect. The Onion, as is often the case, nails its satire of that particular mindset.

Along with the strong prioritization of officer safety, another factor is that officers really don’t receive enough training to be able to handle people well in physical situations. To be really good at subduing someone–so no one gets hurt–would probably require ongoing training at least a couple of times a week, like any sport or martial art. Think about if you’ve ever trained yourself semi-seriously in some physical activity – it’s hard and complex and you have to stay not only in shape but in practice. Some officers can defuse situations with “verbal judo” (or “verbal jujitsu”) because they have that gift. Or if it does become physical, they may be competent to use “defensive tactics” (a required law enforcement course) because they do something like wrestling or a martial art as a hobby. Otherwise cops have a refresher course once a year or every other year for such “perishable skills” – and they are just not going to be very good. They are taught how to escalate, but generally not how to de-escalate. Then they find themselves in situations where they are trained and socially conditioned to discern danger and to make their first priority staying alive (put in those terms, it sounds reasonable, right? Those are the terms it is put in). So you get unskilled, and, in Eric Garner’s case fatal, attempts at restraint. If they are not prepared enough for the one-on-one encounters which probably come up every Friday and Saturday night when the bars let out, then your guess is as good as mine as to how they will handle all that powerful military equipment, but you can begin to see why they would rely on it, particularly faced with a scene that they perceive as threatening.

Another thing happening is that officers are attempting to use the “force option” which will allow them to control the situation (along what is often described somewhat incoherently as a continuum).[2] So that doesn’t mean the officer should just use the next level up, it means they need to take action at the level where they have control, because an uncontrolled situation is considered dangerous for all involved. This is the importance of Officer Wilson’s claim that he thought Michael Brown was going for his gun. This is also what was happening during the first protests when the cops in Ferguson “determined that the protest was no longer peaceful” and began to use tear gas and rubber bullets. From their perspective, they were appropriately controlling the situation (while to just about everyone else, they showed their inexperience in managing crowds, used unnecessary and excessive force, and ultimately inflamed tensions). From their perspective, looting proves their point (although there are indeed other explanations). The difference, of course, has to do with how the protesters, and the series of men who have been killed, are viewed, and that is surely tied up in racial inequality in Ferguson and the United States more broadly.

Which brings us to the militarization of state and local police in the United States.[3] As articles and books have been pointing out for some years, the fact that there are police departments which are armed and armored to the teeth is the legacy of the war on drugs, laws enabling asset forfeiture, and most recently, the rise of homeland security as part of the War on Terror, a pattern of governance that owes a debt to the intimate relationship between defense contractors and the federal government, going back to the Cold War. It’s also the legacy of the 1997 North Hollywood shootout, the 1999 shootings at Columbine High School, and, in general, increasingly powerful guns in the streets in the 1980s and 1990s, and law enforcement’s efforts to catch up.

Even as perverse a requirement as that of one of the military surplus transfer programs that such equipment  be used within a year doesn’t really explain why a police department would use it if in the process it creates imagery so historically freighted and powerfully oppressive that, with no sense of irony, army veterans have objected to being associated with it. But if a police department can have access to the equipment, what it is thinking is that its officers can go out and be that much more protected. When a police department has the equipment (some have elected not to get it), and is convinced its use will keep officers safer, it is going to use the equipment. The chief is not seeing the gear and guns through the eyes of unarmed men and women, on the street and around the world, but as one more tool that will help ensure his or her officers make it home that night, and the world be damned. Or maybe they will see it as an escalation, which you’ll recall may be understood as an appropriate step in controlling the situation.

The paramountcy of officer safety, a reliance on superior (technological) force to control a situation, and a protocol that instructs the police to use the level of force that will produce that control don’t comprise a comprehensive explanation, obviously, nor do they justify what has happened. I point them out just to make some of what is going on less opaque, one step in understanding the creation of events like those this August in Ferguson.

Meg Stalcup (PhD, University of California, Berkeley and San Francisco) is Assistant Professor of Anthropology at the University to Ottawa and editor of selections concerning visual anthropology, visual ethnography, and visual criminology for Anthropoliteia.

[1] An “us versus them” mentality justifying violence also long predates militarization. See Westley (1953) for example, who says it has been around since the inauguration of the municipal police in the United States in 1844.

[2] In the article linked to above and here, the author (a retired police sergeant) notes, “The courts have been very clear in saying: 1) the test is one of reasonableness and not escalation, and  2) officers are not required to use or try lesser alternatives to work up to reasonable force.”

[3] Although “militarization” seems like a self-evident term to describe armored vehicles, bulletproof vests and M4 rifles on the streets of cities and towns, it is also a bit obscuring, suggesting a one-directional transition that ignores the process of “police/military blurring.” SWAT teams, for example, may now be equipped with military surplus, but they were developed by law enforcement, most prominently in Los Angeles in the 1960s. In Iraq, the military ended up turning to SWAT teams for expertise in how to control crowds, and engage in combat in buildings full of civilians. This does not, of course, diminish the significance of the overuse of SWAT teams in the United States, or change the fact that there should be no reason to use them among those assembled to mourn and protest in Ferguson.

2 thoughts on “Notes on Ferguson: Some factors in the policing of protests”