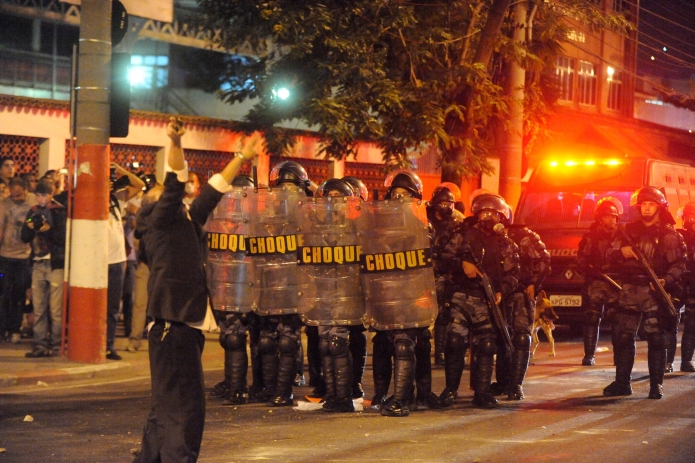 The World Cup may have come to an end this week, but Anthropoliteia was pleased to contribute additional posts in our ongoing coverage of the event. Among them was The Politics of Violence and Brazil’s World Cup by Sean Mitchell.

The World Cup may have come to an end this week, but Anthropoliteia was pleased to contribute additional posts in our ongoing coverage of the event. Among them was The Politics of Violence and Brazil’s World Cup by Sean Mitchell. He discusses the reasons World Cup coverage is best understood through a historical lens of peace and violence in the country. You can find a supporting post on Vice Sports by Brian Mier. We also featured The Brazilian Military, Public Security and Rio de Janerio’s Pacification from Stephanie Savell. Savell discusses favela residents’ feeling of “unmet rights” regarding public security, as well as the implications presented by an increasingly visible security force in the area. We also thank Anthropoliteia’s Kevin Karpiak for sharing Jacqueline Gehring’s World Cup coverage in a feature from the Washington Post. Gehring examines the themes of anti-immigrant politics and soccer in France and Germany.

Louis Kealoha, Police Chief of Honolulu, caused uproar among officers this month after passing a new tattoo policy. The rule states that officers may not have visible tattoos, and no exception has been made to exclude religiously affiliated tattoos. Some officers contest the rule on the grounds of it being anti-religious, with nearly 20% of the department exhibiting such tattoos.

My non-existent prize for best blog post of the month was awarded to Carole McGranahan’s What Does Humanity Look Like? Ethnography of the CIA. Accompany AllegraLab staff to their meeting with Carole to talk about the lessons she learned from studying the secret lives of CIA members. McGranahan also fields questions about the ethical aspects of “the anthropology of the covert”. You can read more about the subfield in her book, Arrested Histories: Tibet, the CIA and Memories of a Forgotten War. Don’t forget to check out SavageMinds’ earlier post by Carole that was featured late last year. A close runner up for best post was It’s 200 Years Old, but What is Italy’s Carabinieri? by Dany Mitzman of BBC News. Discover the history of Italy’s oldest police force, and why the country maintains two functional police forces.

About to embark on another road trip? Enhance your commute with the latest Archipelago podcast from The Funambulist, featuring Tings Chak. Listen for details about her upcoming graphic-essay, Undocumented The Architecture of Migrant Detention that fleshes out her role as both an organizer and designer.

Lastly, Anthropoliteia was happy to feature a brand new From the Field entry with a post by Johanna Romer. In it, she recounts her experiences working in the Spanish prison system. You can access Economies of Security and Care in Catalonia, Spain here.