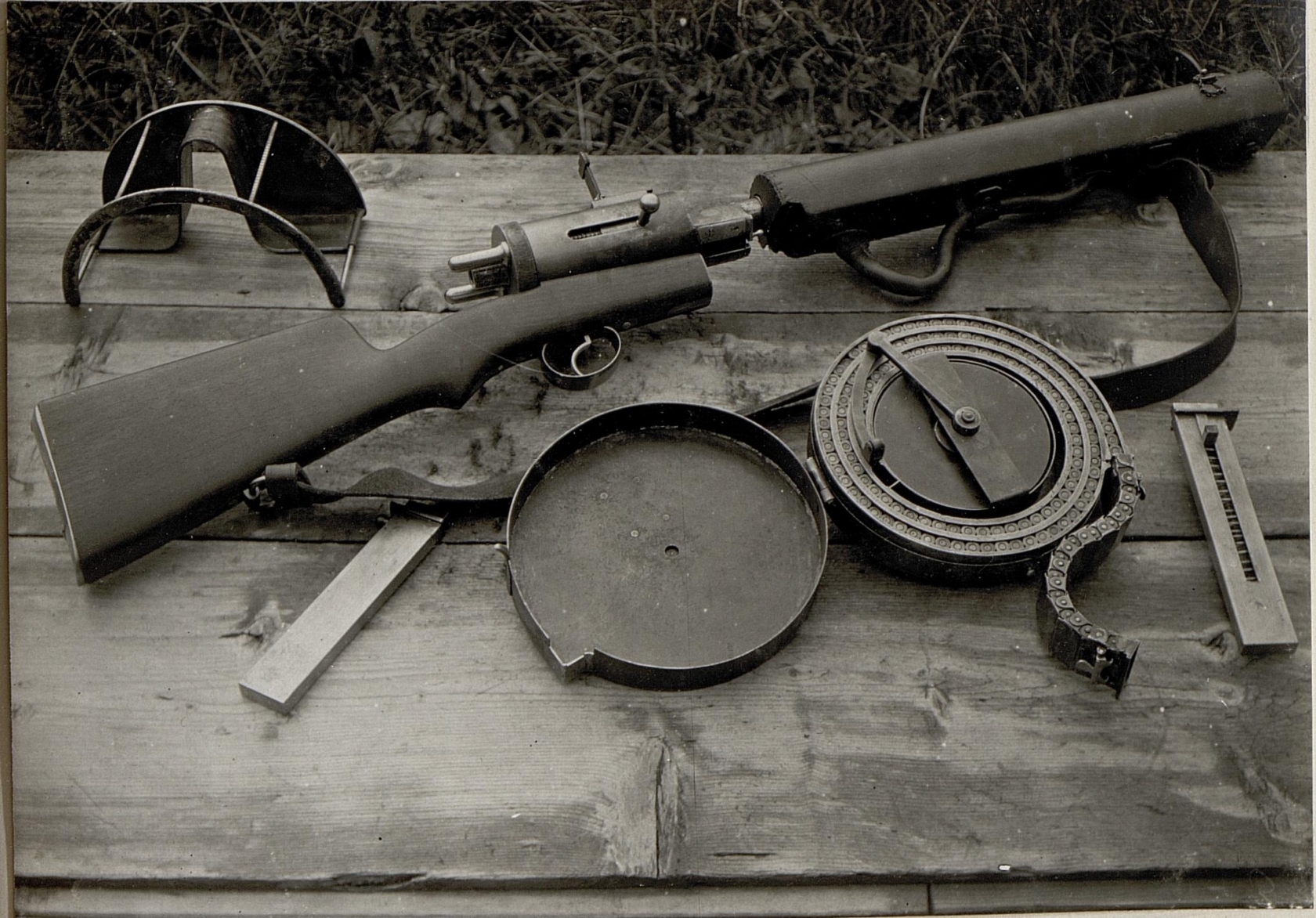 Welcome back to In the Journals, a monthly review of just a fraction of the most recent academic research on security, crime, policing, and the law. The year (both calendar and academic) is coming to a quick end, and we here at Anthropoliteia continue to compile the best and most pertinent recent publications for our readers as fall turns to winter, and the holiday season quickly approaches.

END_OF_DOCUMENT_TOKEN_TO_BE_REPLACED

Standard
The editors of Anthropoliteia are happy to present the latest entry in on ongoing series The Anthropoliteia #BlackLivesMatterSyllabus Project, which will mobilize anthropological work as a pedagogical exercise addressing the confluence of race, policing and justice.  You can see a growing bibliography of resources via our Mendeley feed.   In this entry, Kevin G. Karpiak discusses the critical, pedagogical and political potential of the anthropology of police.

END_OF_DOCUMENT_TOKEN_TO_BE_REPLACED

“I think you have to have a shared collective memory of the past to recognize another human being,” writes Lawrence Jackson. His post, On Becoming More Human, examines the recent protests against police violence in Baltimore from his perspective as an African American man.

I was happy to see Illana Feldman’s new book, Police Encounters: Security and Surveillance in Gaza Under Egyptian Rule, make the rounds on our twitter feed last month. In it, my former Anthropology professor at George Washington University discusses the topics of surveillance, control and police violence in Gaza during the period of Egyptian rule. Disclaimer: you’ll want to block off a few hours to tap into this one…it’s addictive from the start!

“I think you have to have a shared collective memory of the past to recognize another human being,” writes Lawrence Jackson for n plus one magazine. His post, On Becoming More Human, examines the recent protests against police violence in Baltimore from his perspective as an African American man. Jackson is a professor of African American Studies and English at Emory University, and is the author of the 2012 memoir, My Father’s Name: A Black Virginia Family after the Civil War. His post undoubtedly earns my vote for “best of the month”- if you have time for one (and only one) read today, this is it.

Those interested in coverage about the tragic police-related death of Freddie Gray shouldn’t miss NPR’s Weekend Edition that we shared late last month. In it, Scott Simon recounts his experience walking among the residents of West Baltimore in the wake of police protests. As the title attests, to many West Baltimoreans, the “largest gang is, in fact, the police.” We also recommend Ta-Nehisi Coates’ post, Nonviolence as Compliance, which was featured via The Atlantic.

What does the concept of “touch” mean, in a policing context? Mark Greif reflects on this question and more in his post, Seeing Through Police. He discusses the “rules” of police-citizen contact (i.e.- they touch you, you keep your hands to yourself), its many functions (intimidation, reassurance, “traffic direction”) and forms (hands vs. batons). What’s perhaps most intriguing about this post is its dual -and rather empathetic- consideration of police as police, and police as people. At the same time, it presents a critical and well-balanced portrait of modern police practices. Welcome back to In the Journals, a bi-monthly look at the recent academic publications that deal with issues of security, crime, policing and the law. The last few months have seen a slew of new journal issues and many noteworthy articles of interest to anthropoliteia’s readers – below are just a few of these to browse through over the Fall.

END_OF_DOCUMENT_TOKEN_TO_BE_REPLACED

A friend sent me an article which quoted a police officer in Ferguson, MO snarling to a crowd, “Bring it. You fucking animals, bring it.” She asked for my thoughts. I’d seen the article earlier, part of the news reporting and blogosphere discussion of people of color killed by on-duty officers and the accompanying demonstrations against police violence. I think that coverage has correctly pointed to 1) entrenched racism, such that black faces are reflexively perceived as suspicious and dangerous, 2) and militarization of the police. But even with these explanations there seems to remain something incomprehensible, and I think that comes from just how differently the police tend to understand what they do.

END_OF_DOCUMENT_TOKEN_TO_BE_REPLACED

The editors of Anthropoliteia welcome Johanna Römer with a Dossier in our From the Field section.

“The history of prisons in Spain?” a Catalan prison guard asked me, a man in his mid-forties, his hands resting on a heavy leather belt. “Everything has already been written. Our vocabulary, our forms of punishment – even the word cell itself, all come from Catholic and monastic practices.”

He turned to face the thick glass wall of the bunker.

“I spent years teaching…in law enforcement, in the private sector, and now I just want to be here, with these guys [inmates], where I can have peace and quiet,” he said, nodding towards a small group of men talking softly around a checked tablecloth whose color was imperceptible through the glass.

“Look at that. No one makes problems.”

While monitoring the inmates through the glass, the guard narrated other stories of prison work; but his last seemingly unremarkable comment, “no one makes problems,” stayed with me.

END_OF_DOCUMENT_TOKEN_TO_BE_REPLACED

The editors of Anthropoliteia welcome Sean T. Mitchell with the latest entry in our forum Security in Brazil: World Cup 2014 and Beyond. 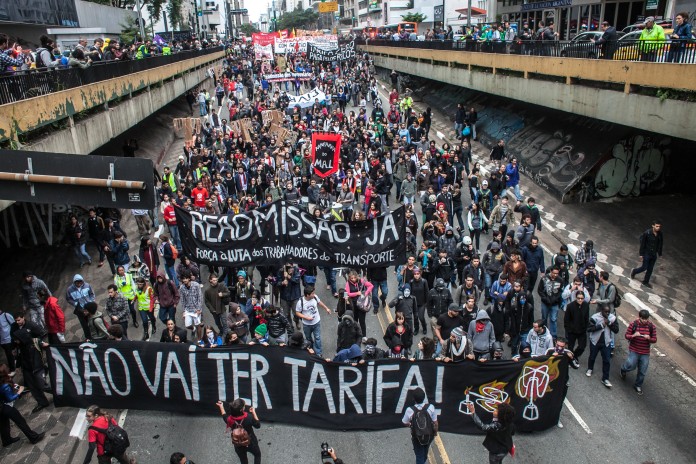 A June 19, 2014 São Paulo protest called by the Movimento Passe Livre (Free Fare Movement) to protest transport fares and conditions was mischaracterized internationally as an “Antigovernment” and “World Cup” protest. The banner in front reads, “There will be no fare.” Photo: Oliver Kornblihtt/ Midia NINJA

On Failure, Violence, and the World Cup

Not unlike the 2010 hoopla anticipating that year’s South Africa World Cup, the breathless expectation of failure and security breakdown that characterized much international coverage of the lead up to Brazil’s 2014 World Cup, now, midway through the month-long event, seems to have been ill–founded.

When reporting wasn’t merely what Meg Stalcup characterized on this forum as fluff—which much of it was—pre World Cup coverage in the global north press was overheated and macabre.  Why?

The last year has seen the emergence of large scale Brazilian protest movements of clear importance, and the World Cup has been a target of their criticism.  But the macabre emphasis on violence and failure has obscured much more than it has illuminated about these movements, and about the real violence and social conflicts in contemporary Brazil.

To understand why so much coverage has taken this lurid form, it helps to look at historical representations of peace and violence in Brazil, as well as contemporary politics in Brazil and abroad.