The editors of Anthropoliteia are happy to relaunch the second semester of an ongoing series The Anthropoliteia #BlackLivesMatterSyllabus Project, which will mobilize anthropological work as a pedagogical exercise addressing the confluence of race, policing and justice. You can see a growing bibliography of resources via our Mendeley feed.  In this entry,  Riché Barnes discusses #BlackFamiliesMatter, especially Black mothers. 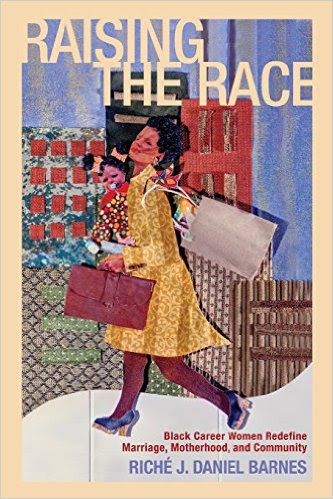 I was just about done with this blogpost when given this weekend and the past week’s news I had to regroup. The Trump administration’s war on families picked up momentum this week with yet another assault. As I watched people gathered in airports with hand-made signs reading “we want grandma,” while journalists interviewed people waiting, hoping, and praying their loved ones would not be detained, or worse, deported. As I heard people repeatedly say, “we talked to him as he was boarding the plane,” but we haven’t heard from him since,” I was immediately taken to that old refrain of not hearing or getting word, but somehow knowing something awful had happened and it would change the course of your life forever.

My addition to the #BlackLivesMatter syllabus is #BlackFamiliesMatter. The Black family has been under assault since the beginning of the TransAtlantic Slave Trade, as individuals were torn from their families, their villages, their culture and customs. And while anthropologists have been keen on noting the importance of families for maintenance, dissemination, and continuation of culture, their/our focus on Black families has left much to be desired. Indeed our definitions of family have been rooted in an ethnocentric ethos that normalized US white, middle-class representations of family and compared all others to them, with little theoretical regard for the necessary adaptive role “family” must take for the survival of its members. I have admittedly been working to correct and/or add to anthropology’s body of knowledge as it pertains to Black American families in all their complexity for over a decade (Barnes 2016). It is important to note at the outset that while I speak of Black American families as a collective, Black American families are quite diverse. However, similar to our understanding of the Black community, the diversity of representation is overshadowed by the unity of experience in the U.S. “neo-colonial, white supremacist, capitalist patriarchy” (hooks 2003, 79).

When examining the intersection of #BlackLivesMatter and #Black FamiliesMatter, I must make the connections between the “war on poverty,” the “war on drugs” and mass incarceration, reproductive justice, and the shifts in and ultimate destruction of the welfare state, or what President Clinton called “the end of welfare [and social safety nets] as we know it.”

Fifty-one years after the implementation of President Johnson’s “war on poverty,” the Moynihan report continues to have devastating effects on Black families. The now infamous report, penned by sociologist and then Assistant Secretary of Labor, Daniel Patrick Moynihan, has had enduring effects on policies directly related to the status of black families, women and gender equity, and employment opportunities and poverty. Many anthropologists have found it an important time to engage these effects especially as Moynihan’s focus on the “culture” of black families continues to be used to bolster neoconservative and neoliberal policy changes among Democratic and Republican officials. Some of the most deleterious of these policy initiatives, particularly on the federal level, have been Ronald Reagan’s War on Drugs, Bill Clinton’s PRWORA (1996), G.W. Bush’s simultaneously initiated Healthy Marriage Initiative (2001) and strengthening of DOMA (2004; signed into law by Clinton 1996; overturned by the Supreme Court 2013), and Barack Obama’s “My Brother’s Keeper” Initiative (2014). In addition to the myriad federal programs, individual states have implemented their own initiatives against black and poor communities including bans on the use of aid on certain purchases and drug screenings for would-be recipients of aid.

The report has also been used repeatedly to bolster the overall assumption that black people have a “strange” and “un-familiar”culture that needs to be “fixed.” The media’s stereotypical portrayal of Black and poor families, single black mother households, and the decline in black family marriage rates all point to the efficacy of Moynihan’s report and provide justification for not only policies that chastise, surveille, and punish the poor, but also blame them for the lack of available resources and the resultant effects. As a result, at this point not only do many whites and elite blacks believe in these stereotypical views of the poor and “underclass” but those who are the most downtrodden in our society have found just cause and evidence to blame themselves.

Ta-Nehisi Coates, writing for The Atlantic at the fiftieth anniversary of the report, situates Moynihan’s analysis of racial inequality as framed by Moynihan’s own biography, which Coates argues is deeply influenced by patriarchy. This drives Moynihan’s over-emphasis on the relationship between racial inequalities and the dysfunctionality of black families. Moynihan suggested that the cultural “choice” to over-rely on women and mothers, a matriarchy instead of a patriarchy, was the reason for the persistence in generational Black American poverty. While it was not Moynihan’s intent to conclude with this analysis (he and Johnson actually wanted the American government generally, and white people more specifically, to take responsibility for their perpetuation of discrimination against and of oppression of Black Americans), Moynihan did not outline any policy initiatives in the report and ultimately left the reader and conservative policymakers to conclude that only black people, and ultimately black women, could fix the problems rooted in black families.

With no policy initiatives designed to help black families, crime rates rose, particularly in northern inner cities facing deindustrialization. The public policy response to changes in crime rates was the tough on crime legislation of the 1980s. Scholars have repeatedly reported that the incarceration rate doubled from the 1970s to the 1980s and then doubled again from the mid-1980s to the mid-1990s. While the incarceration rate of young, primarily black young men was looking large, so was the homicide rate, as drug networks replaced first jobs. Left to deal with the resulting aftermath of incarceration, rising crime, and limited opportunities to earn a living? Black women and mothers who were caught between stereotypes of crack whores, baby mamas and welfare queens.

As Coates states, “The emergence of the carceral state has had far-reaching consequences for the economic viability of black families.” And it is not just for the economic viability but for the physical and mental health of its members. Scholars have recently turned to a discussion of the myriad ways Black women experience, explain, and cope in the face of racism and anti-black state-sponsored violence against their Black children. A special issue of Transforming Anthropology (April 2016) saw its contributors open a conversation that continues to investigate Black mothers’ unique experience with violence and terror and the diverse political, coping and healing processes Black women employ in order to deal with the unspeakable pain throughout the Diaspora .

And then there is the neoliberal turn in every area of our society that focuses our attention on the private sector and fuels our reliance on powerful non-state institutions that perpetuate the idea that the market will regulate itself. We have therefore seen an increase in public-private sector partnerships in education, public safety, and health care in which private concerns about profit making take precedence over pubic concerns. With the inauguration of the Trump Administration, spaces that have traditionally been beyond the scope of state and corporate goals have seen an increase in corporate ideology.

I continue to believe in the impact anthropologists can have on the way social science and the popular press investigate and address the needs of transnational black, brown, and beige communities. Given anthropology’s position I continue to encourage and implore anthropologists to examine kinship and family with a cross-cultural lens and reassert the disciplines’ important and necessary contribution to the way we study families and their communities now and into the future.

Barnes, Riché. 2016a. “She Was A Twin”: Black Strategic Mothering, Race-Work and The Politics of Survival”. Special Issue: Sorrow as Artifact: Radical Black Mothering in Times of Terror, Ed. Christen A. Smith. In Transforming Anthropology, 24(1): 49-60.

Riché J. Daniel Barnes, M.S., Ph.D. is a sociocultural anthropologist who focuses her research and teaching on racial formation, race, class, and gender strategies, work-family policy, and the sociocultural and political economy of Black identified communities in the Americas. Her most recent publication is the book, Raising the Race: Black Career Women Redefine Marriage, Motherhood, and Community (Rutgers University Press 2016). Barnes is the recipient of several fellowships and has received grants from both the Ford Foundation and the Sloan Foundation. Her current ethnographic research focuses on the impact of urban education reform on Black families and communities. Barnes previously taught at Spelman College (2003-2007) and Smith College (2007-2016), and has lectured at several colleges and universities including Boston College, Virginia Tech, UNC Chapel Hill, and Wesleyan University. She is currently an Associate Professor of Sociocultural Anthropology and the Assistant Dean of Social Sciences at Endicott College.