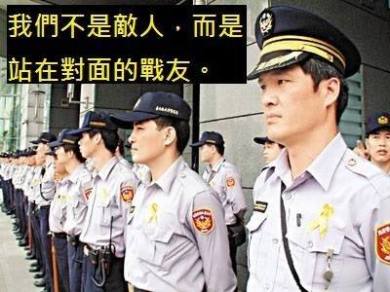 “We are not enemies. We are allies that stand facing one another” (caption to a picture that is purportedly an expression of police attitudes towards the recent occupation of Taiwan’s legislature)

In the context of a loving relationship between consenting adults, it’s normal for police to get screwed from both sides. Taiwanese democracy is sometimes a strained marriage, however. Tensions are introduced to any enterprise of collective self-determination when the great power next door insists your state does not exist. The existential tensions of Taiwanese democracy are currently being expressed in a constitutional crisis.  Last Tuesday night, the unpopular president’s ham-fisted attempt to fudge the procedures involved in his party’s pursuit of economic integration with China blew up in his face. Dissident students (later joined by their professors, constitutional law scholars and, increasingly, the general public) occupied the legislative assembly to physically prevent the conclusion of a process that would have endowed an agreement concluded between legislatively unqualified bodies with the force of statutory law.