The New York State Department of Corrections and Community Supervision (NY DOCCS) operates fifty-four prisons, which confine approximately 53,565 people. This captive population is ninety-six percent male; fifty percent black, twenty-four percent latino and twenty-four percent white. Though half of them were convicted for charges that occurred within New York City, most of them are confined in prisons located in distant, rural parts of New York State.[1] 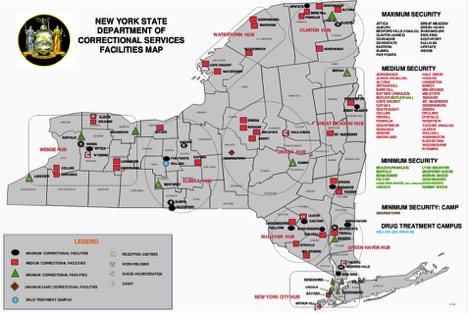 I entered the visitor waiting room, a trailer that rests on the grounds of the prison. Though I arrived at 7:45am, a full 45 minutes before the start of visiting hours, the inside of the trailer was already full. I signed in at the rear of the space where two Correctional Officers (C.O.s) stood behind a tall wooden desk. I took one of the only available seats, which happened to be right next to them.