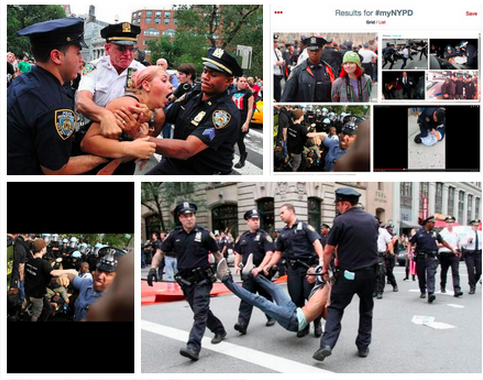 What was on April’s Blog Menu, you ask? A flurry of posts covering everything from issues in ethnicity, crime stat validity, police social media involvement and ongoing Ukraine and surveillance coverage, of course! END_OF_DOCUMENT_TOKEN_TO_BE_REPLACED

Standard
The editors of Anthropoliteia would like to welcome Taras Fedirko with the latest entry in our developing Forum What’s Going on in Ukraine?

Violence as other; other as the authorities

In their responses to police violence during the ‘Euromaidan’in Ukraine, protesters and engaged commentators often located the source of brutality in some sort of unofficial, ‘other’realm within the state. Narratives of police brutality became narratives of the state as the riot police came to be imagined as commanded directly by the president Yanuokovych; authorities were thought to conspire against the Maidan; and snipers shooting at protesters on February 18-20 were said to be ‘Russian-trained.’

My interest here is in how protesters and sympathetic media represented the standoff between Maidan and ‘Berkut’ riot police not so much in terms of the enforcement of public order or contestations over what such order is/should be, but in terms of a confrontation between protesters and the authorities (rather than the police). The term for the ‘authorities’in Ukrainian is vlada, which simultaneously means abstract ‘power’and ‘people in/holding power’. Although it has an official usage (e.g. orhany vlady—state institutions, literally ‘organs of power’), it is crucial that in Ukrainian there is no word for ‘authority’and, I would add, no pragmatic difference between power and authority. The ‘realist’term vlada therefore maps the lack of emic differentiation between the official and unofficial power. I suggest that the displacement of the source of police agency to vlada was premised on understandings of vlada as the source of both official/formal and informal power in the society. END_OF_DOCUMENT_TOKEN_TO_BE_REPLACED