One feature of the contemporary in Ukraine is that things are fluid. By that, I mean subjectivities are a matter of thoughtful reflection and seemingly relentless less-conscious revision; structures of thought, sociability, and action also seem fluid. It is hard to distinguish an event from a non-event. So many things could be an event. Likewise, the “important” is up for grabs. Normal narrative structures, beginning-middle-end, rarely appear in Ukrainian retellings of their post-Soviet history or political development, except in strangely discreet episodes that sound more like family folklore than established history. A master narrative does not yet dominate. (Again, enter Bakhtin.) My theory is that this un-arcing historiography dominates because the situation itself is openly characterized by fluidity and emergence; those living it recognize that unsettling fluidity and they recognize that constructing a master narrative holds political consequences. I have thus found myself reluctant to report on contemporary happenings in Ukraine in part because of my resistance to participating in the construction of a master narrative. One of the things that has seemed so unbelievable, and so (to my aesthetic) charming, about post-Soviet Ukraine has been the openness, fluidity, and unpredictability. Far be it from me to participate in chilling the flow.

At the same time, things are happening; others are attempting to report. When that reporting seems predesigned to illustrate pre-established master narratives, the agenda gets in the way. And in any case, any reporting on happenings in Ukraine these days is by necessity partial, and thus, distorting. In the interest of rounding out that picture, then, I offer here a series of vignettes. For now, at least, I’m resisting placing these vignettes in a series resembling crisis, climax, denouement — the framing devices of ex-post epic composition. Each episode may have its own narrative beginning-middle-end, but they are not yet fit into a grand story that puts all the pieces together (and thus will leave many pieces out in the process).

My first post on this blog showed the encounter between a Ukrainian journalist and some of the forces that had taken over a local Ukrainian installation after the physical takeover of Ukrainian installations on Crimea that began on March 1. However, even before that, there had been Russian troop movements through southern Ukraine/Crimea on February 27 and 28, catching everyone by surprise. 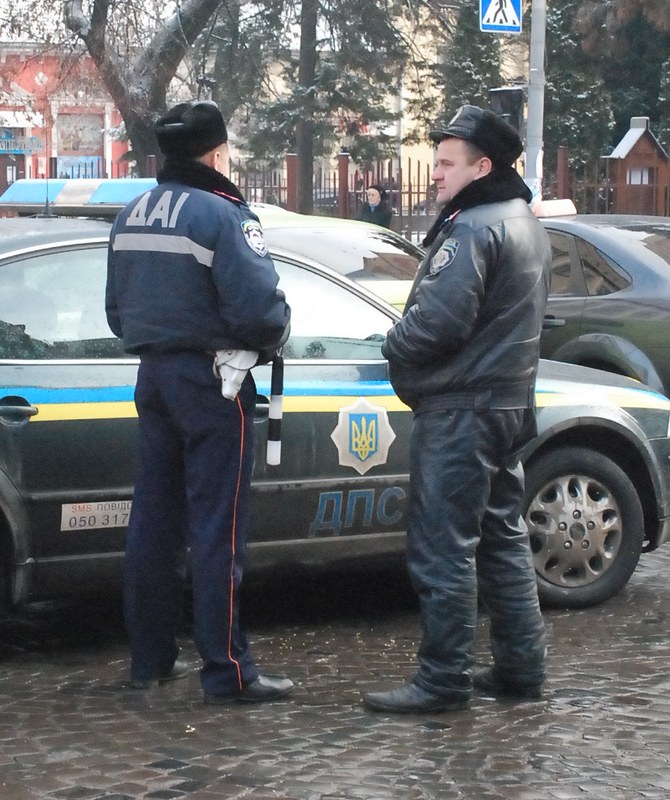 For example: The following clip from the Ukrainian news broadcast “Fakty” shows Ukrainian traffic cops on a rural Crimean highway pulling over a Russian troop convoy on Feb. 27. At about min. 00:30, you’ll see a little helmeted head popped out of the top, accosted by a woman’s voice (the traffic cop) asking briskly and officiously, “A otkuda vy? Kuda vy ezdite? [And where are you from? Where are you going?]” (From her tone of voice, it almost feels like, “Where THE HECK are you from? And where THE HECK are you going?” At least that’s how it sounded to my incredulous ears when I first saw this clip Feb. 28.) At about min. 00:40, the person with the camera (male voice) asks another traffic cop, “Who were those guys? Russian? Or Ukrainian?” The traffic cop answers firmly but circumspectly (and incredulously?), “Nyeeeet. Ne Ukrainskiy. [Nooooo, they weren’t Ukrainian.]”

The traffic police (acronymed DAI in Ukrainian, GAI in Russian) routinely top surveys as most widely perceived as corrupt out of all state employees in Ukraine, and — no surprise, then, — the most disliked public servants. [The DAI typically have a stop on the highway outside almost every sizable town where they wave a black-and-white striped stick colloquially known as a “pozhaluista stick” [“‘please’ stick”] to flag down passing drivers and demand on the spot payment of a small “fine” in cash, without traffic ticket or receipt for cash tendered.] In this video, DAI armed only with pozhaluista stick flag down a convoy of bullet-proofed combatants. It’s a ridiculous, almost M*A*S*H-like situation. It may also show the Ukrainian traffic police’s moment of glory.

Monica Eppinger is an Assistant Professor at the Saint Louis University College of Law. She has extensive experience in diplomacy, serving nine years as a diplomat in the U.S. Foreign Service with tours of duty at the U.S. Consulate General in Kaduna, Nigeria; U.S. Embassy, Kiev, Ukraine; and at the State Department in Washington, D.C. where her responsibilities included policy in the former Soviet Union, Caspian basin energy development, and West African security. Her research concentrates on sovereignty and selfhood. Her main areas of expertise include property, national security, and international law.

3 thoughts on “Crimea: On aesthetics, master narratives, and resistance”